Snowflake (Parts of a Sentence) 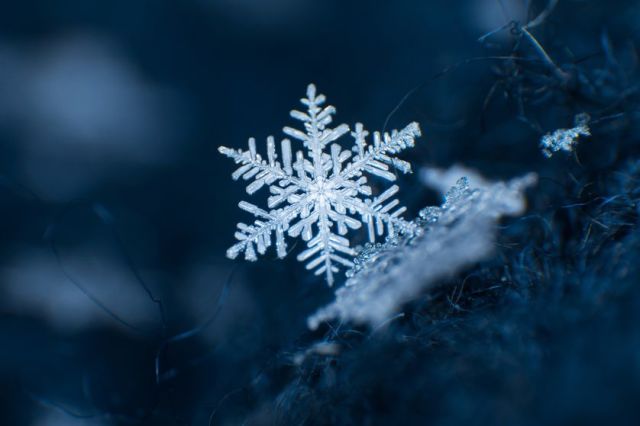 A snowflake is a single ice crystal that has achieved a sufficient size, and may have amalgamated with others, then falls through the Earth's atmosphere as snow. Each flake nucleates around a dust particle in supersaturated air masses by attracting supercooled cloud water droplets, which freeze and accrete in crystal form. Complex shapes emerge as the flake moves through differing temperature and humidity zones in the atmosphere, such that individual snowflakes differ in detail from one another, but may be categorized in eight broad classifications and at least 80 individual variants. The main constituent shapes for ice crystals, from which combinations may occur, are needle, column, plate, and rime. Snow appears white in color despite being made of clear ice. This is due to diffuse reflection of the whole spectrum of light by the small crystal facets of the snowflakes. Snowflakes nucleate around mineral or organic particles in moisture-saturated, subfreezing air masses. They grow by net accretion to the incipient crystals in hexagonal formations. The cohesive forces are primarily electrostatic. In warmer clouds, an aerosol particle or "ice nucleus" must be present in (or in contact with) the droplet to act as a nucleus.
Fuente: Wikipedia
Corregir
Debate