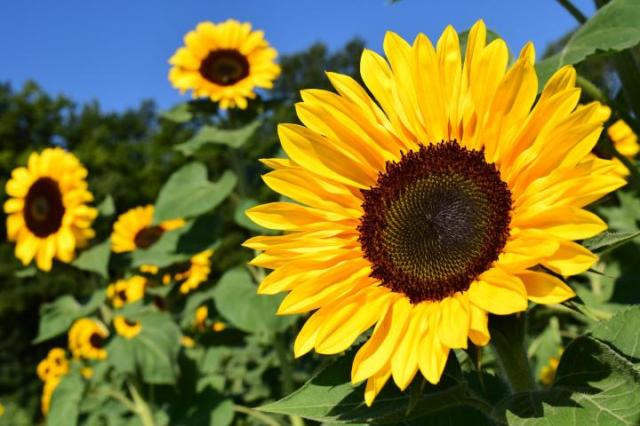 Sunflowers are usually tall annual or perennial plants that in some species can grow to a height of 300 cm (120 in) or more. They bear one or more wide, terminal capitula (flower heads), with bright yellow ray florets at the outside and yellow or maroon (also known as a brown/red) disc florets inside. Several ornamental cultivars of H. annuus have red-colored ray florets; all of them stem from a single original mutant. During growth, sunflowers tilt during the day to face the sun but stop once they begin blooming. This tracking of the sun in young sunflower heads is called heliotropism. By the time they are mature, sunflowers generally face east. The rough and hairy stem is branched in the upper part in wild plants but is usually unbranched in domesticated cultivars. The petiolate leaves are dentate and often sticky. The lower leaves are opposite, ovate, or often heart-shaped.

They are distinguished technically by the fact that the ray florets (when present) are sterile, and by the presence on the disk flowers of a pappus that is of two awn-like scales that are caducous (that is, easily detached and falling at maturity). Some species also have additional shorter scales in the pappus, and one species lacks a pappus entirely. Another technical feature that distinguishes the genus more reliably, but requires a microscope to see, is the presence of a prominent, multicellular appendage at the apex of the style. Further, the florets of a sunflower are arranged in a natural spiral.

Variability is seen among the perennial species that make up the bulk of those in the genus. Some have most or all of the large leaves in a rosette at the base of the plant and produce a flowering stem that has leaves that are reduced in size. Most of the perennials have disk flowers that are entirely yellow, but a few have disk flowers with reddish lobes. One species, H. radula, lacks ray flowers altogether.


Identify the verbs in the given sentences.
Source: Wikipedia