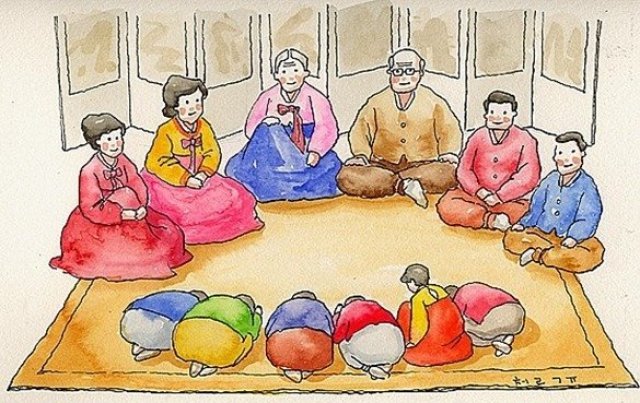 Korean New Year is typically a family holiday. The three-day holiday is used by many to return to their hometowns to visit their parents and other relatives, where they perform an ancestral ritual called charye. The three days are the day of, the day before, and the after.[3] In 2016, 36 million South Koreans reportedly would be traveling to visit their families during the Korean New Year. Koreans not only travel within the country, but around the world, as well. Many Koreans travel from overseas to visit their families for this annual holiday. Since it is one of the few times families may be able to get together and catch up on one another's lives, it is considered respectful and important to attend the holiday. Often, the family members first visit the elders, and this includes the grandparents and the parents. It is also considered respectful for people to visit their mothers- and fathers-in-law during the Korean New Year.

Including travel expense, preparation for this holiday is very costly. Gifts are usually given to family members and new clothes are worn during the holiday. Traditional food is prepared for many family members coming to visit for the holiday. Fruits are especially expensive. Due to the increased demand, food prices are inflated during the month of Seollal. As a result, some people have chosen to forgo some traditions because they have become too expensive. These families prepare a modest ancestral rite only with necessary foods for Seollal. The government has started taking certain measures to help stabilize and support ordinary people's livelihood for Seollal holiday period. They have raised the supply of agricultural, fishery, and livestock products. The government used the rice reserves and pork imports to lower inflation. The government is also putting money into small and medium-sized companies to help with cash flow.

Many preparations go into celebrating the Korean New Year. During the first morning, Koreans pay their respect towards their ancestors. Traditional foods are placed on a table as an offering to the ancestors, and a rite begins with deep bows from all family members. This is a sign of respect and a very important practice on the first day of the New Year in Korea. It is also where they pray for the well-being of all the family members.[3] Many Koreans dress up in colorful traditional Korean clothing called hanbok. Hanbok are usually worn for special occasions such as weddings, Korean New Year, child's first birthday, etc. However, with modernization and evolving mores in the culture, more people tend to prefer westernized, modern clothing to the hanbok. After the rite, the members have a big feast.
Source: Wikipedia