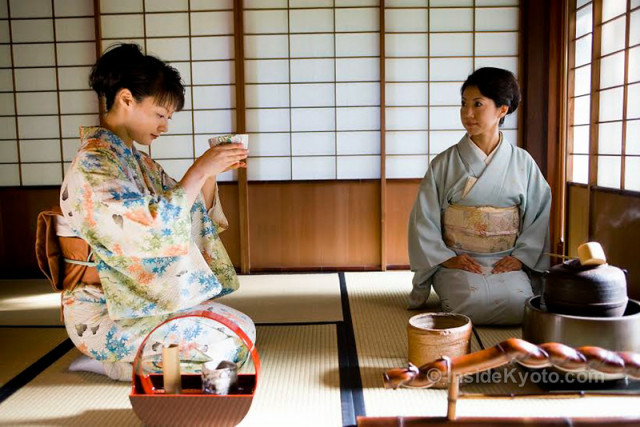 The tea ceremony, literally translated as "way of tea" in Japanese,"etiquette for tea" or "tea rite" in Korean, and "art of tea" in Chinese is a cultural activity involving the ceremonial preparation and presentation of tea. The Japanese tea ceremony is better known, and was influenced by the Chinese tea culture during ancient and medieval times, starting in the 9th century when tea was first introduced to Japan from China. The Vietnamese tea ceremony, also influenced by its Chinese counterpart, is only performed during weddings and other religious rituals. One can also refer to the whole set of rituals, tools, gestures, etc. used in such ceremonies as tea culture. All of these tea ceremonies and rituals contain "an adoration of the beautiful among the sordid facts of everyday life", as well as refinement, an inner spiritual content, humility, restraint and simplicity "as all arts that partake the extraordinary, an artistic artificiality, abstractness, symbolism and formalism" to one degree or another.

At a very basic level, tea ceremonies are a formalized way of making tea, in a process which has been refined to yield the best taste. Historical documents on the subject include the 8th-century monograph "The Classic of Tea" and the 12th-century book Treatise on Tea.
In Japan, a tea ceremony is a blend of two principles, sabi and wabi. "Wabi" represents the inner, or spiritual, experiences of human lives. Its original meaning indicated quiet or sober refinement, or subdued taste "characterized by humility, restraint, simplicity, naturalism, profundity, imperfection, and asymmetry" and "emphasizes simple, unadorned objects and architectural space, and celebrates the mellow beauty that time and care impart to materials. "Sabi," on the other hand, represents the outer, or material imperfection of life, also the original nature of things. Zen Buddhism has been an influence in the development of the tea ceremony. The elements of the Japanese tea ceremony is the harmony of nature and self cultivation, and enjoying tea in a formal and informal setting. The Japanese tea ceremony developed as a "transformative practice", and began to evolve its own aesthetic, in particular that of "sabis" and "wabis" principles. Understanding emptiness was considered the most effective means to spiritual awakening, while embracing imperfection was honoured as a healthy reminder to cherish our unpolished selves, here and now, just as we are – the first step to "satori" or enlightenment. Tea drinking is used as an aid to meditation, for assistance in fortune telling, for ceremonial purposes and in the expression of the arts.
Source: Wikipedia