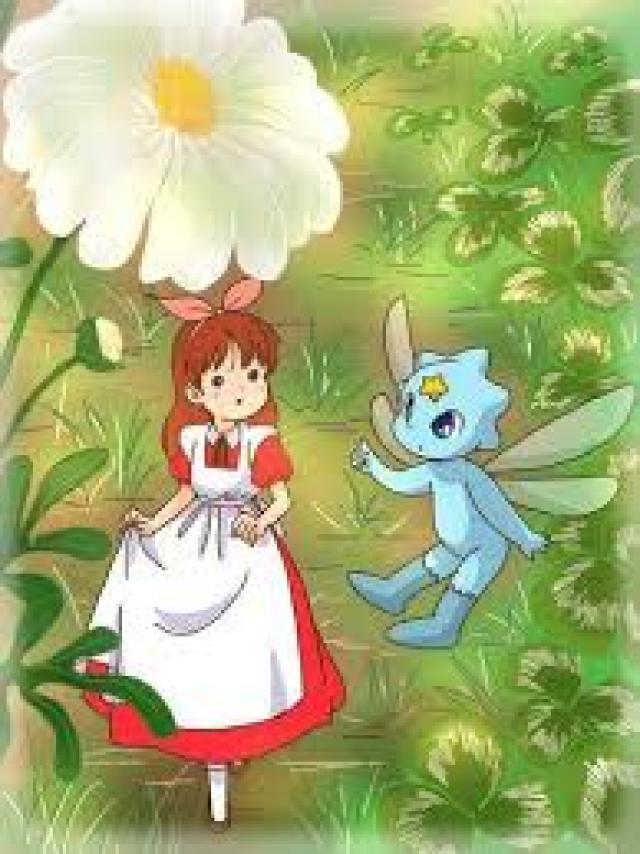 A woman yearning for a child asks a witch for advice, and is presented with a barleycorn which she is told to go home and plant (in the first English translation of 1847 by Mary Howitt, the tale opens with a beggar woman giving a peasant's wife a barleycorn in exchange for food). After the barleycorn is planted and sprouts, a tiny girl, Thumbelina (Tommelise), emerges from its flower. One night, Thumbelina, asleep in her walnut-shell cradle, is carried off by a toad who wants her as a bride for her son. With the help of friendly fish and a butterfly, Thumbelina escapes the toad and her son, and drifts on a lily pad until captured by a stag beetle who later discards her when his friends reject her company.

Thumbelina tries to protect herself from the elements, but when winter comes, she is in desperate straits. She is finally given shelter by an old field mouse and tends her dwelling in gratitude. The mouse suggests Thumbelina marry her neighbour, a mole, but Thumbelina finds the prospect of being married to such a creature repulsive because he spends all his days underground and never sees the sun or sky. The field mouse keeps pushing Thumbelina into the marriage, saying the mole is a good match for her, and does not listen to her protests.

At the last minute, Thumbelina escapes the situation by fleeing to a far land with a swallow she nursed back to health during the winter. In a sunny field of flowers, Thumbelina meets a tiny flower-fairy prince just her size and to her liking, and they wed. She receives a pair of wings to accompany her husband on his travels from flower to flower, and a new name, Maia. In the end, the swallow is heartbroken once Thumbelina marries the flower-fairy prince, and flies off eventually arriving at a small house. There, he tells Thumbelina's story to a man who is implied to be Andersen himself, who chronicles the story in a book.