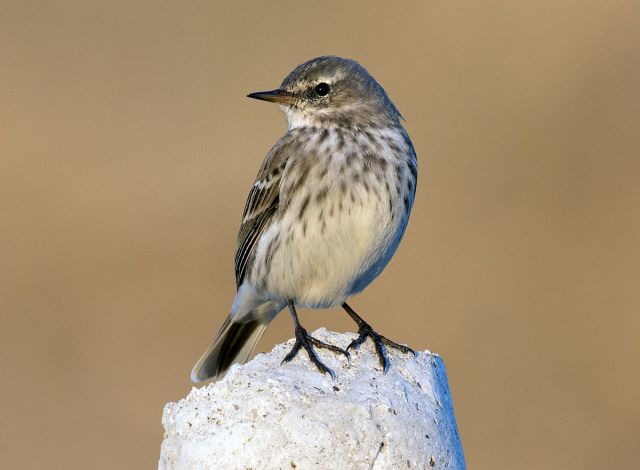 The water pipit (Anthus spinoletta) is a small passerine bird which breeds in the mountains of Southern Europe and Southern Asia eastwards to China. It is a short-distance migrant; many birds move to lower altitudes or wet open lowlands in winter.

The water pipit in breeding plumage has greyish-brown upperparts, weakly streaked with darker brown, and pale pink-buff underparts fading to whitish on the lower belly. The head is grey with a broad white supercilium ("eyebrow"), and the outer tail feathers are white. In winter, the head is grey-brown, the supercilium is duller, the upperparts are more streaked, and the underparts are white, streaked lightly with brown on the breast and flanks. There are only minor differences between the three subspecies, the sexes are almost identical, and young birds resemble adults. The water pipit's song is delivered from a perch or in flight, and consists of four or five blocks, each consisting of about six repetitions of a different short note.

Water pipits construct a cup-like nest on the ground under vegetation or in cliff crevices and lay four to six speckled grey-ish white eggs, which hatch in about two weeks with a further 14–15 days to fledging. Although pipits occasionally catch insects in flight, they feed mainly on small invertebrates picked off the ground or vegetation, and also some plant material.

The water pipit may be hunted by birds of prey, infested by parasites such as fleas, or act as an involuntary host to the common cuckoo, but overall its population is large and stable, and it is therefore evaluated as a species of least concern by the International Union for Conservation of Nature (IUCN).
Source: Wikipedia